Adventureland Amusement Park on Route 110 in Farmingdale, New York has been one of Long Island’s favorite destinations for family fun since 1962. Adventureland has seen three generations of thrill seekers come through their gates. The park has always been family owned and operated and the current owners took over in 1987. As one of the biggest goals that Adventureland strives for each day is providing a safe and clean environment for all visitors, in order to prepare the park for its milestone celebration of 50 years in business they knew a thorough cleaning of the entire grounds was necessary.

Their search for the right company to handle this task began this past winter. Several large exterior cleaning companies, including Island Wide Pressure Washing (“IWPW”), were contacted for pricing bids on this large project. Tom Rice, the owner of IWPW, met with the owners of the park to discuss what their needs were and how he would best manage the job in order to meet their expectations. After several weeks IWPW was awarded the contract and work was scheduled to begin in March 2012.

Tom Rice arrived at this iconic park with a crew of five men and several trucks to clean this 100,000 square foot park from top to bottom. Over the course of two weeks and many long hours, IWPW washed all of the flatwork throughout the entire park, including all brick, pavers and concrete in the various sections of the park. They also cleaned the exterior walls of all the concession and game stands throughout the park. As the rides are the main attraction at the park, they were all cleaned and spruced up as well!

The owners of Adventureland were extremely happy with the work done by IWPW. Tom and his crew arrived on time and ready to work every day and were more than happy to deal with any problems or questions that arose from the management. There were several times they needed to stop working to accommodate special events taking place at the park, and then resume work at a later time. All of IWPW’s hard work was well worth it as the park looks almost like it did when it opened its gates in 1962. This iconic park is now ready to celebrate its 50th Anniversary Year with the help of Island Wide Pressure Washing! 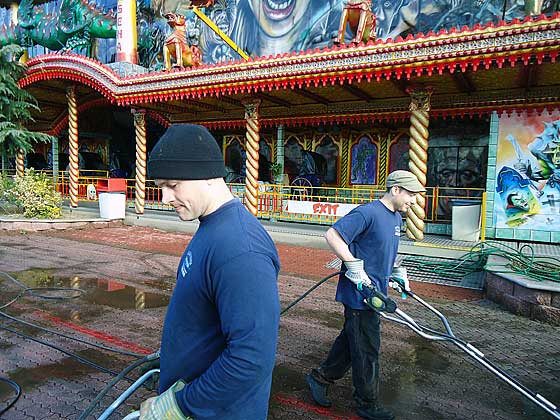